Trending Now
Peacock Lifespan: How Long Do They Live? Amazing...
What Are The Signs That Your Turtle Is...
Cashmere Lop Rabbit Amazing Info!
Turquoise Green Cheek Conure You Need Know!
How to Keep Your Dog’s Ears Clear of...
What You Should Know About Hermit Crabs Out...
700+ Famous Duck Names – Male and Female...
Does Autism Affect Cats? What You Should Know!
Cane Corso Amazing Dog Breed Info You Need...
Rex Guinea Pig Amazing Info You Need To...
AnimalWildlife

What Sound Does a Zebra Make? 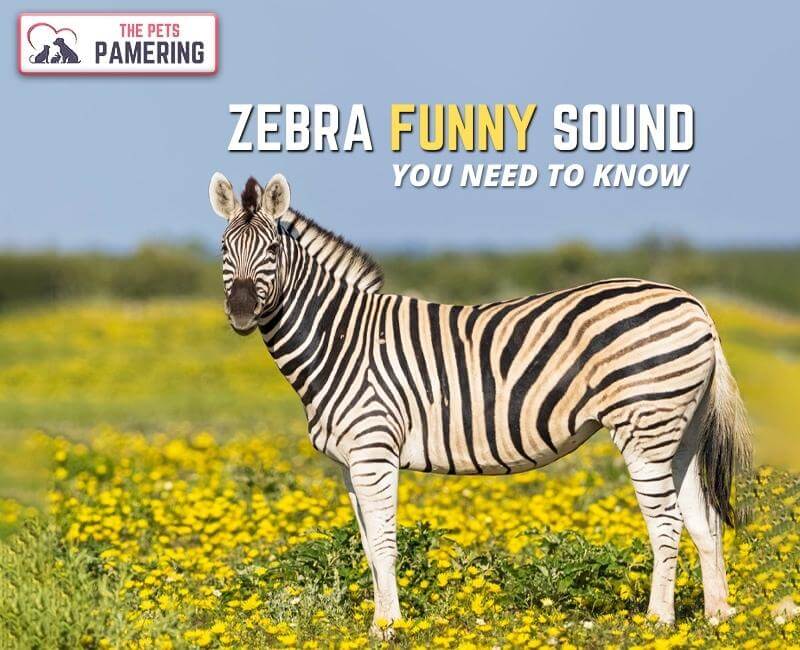 Zebra sound? Zebras are an abundant feature of the African landscape.

They hang around in herds, and sometimes even migratory super herds of thousands of members.

You’ll often see them grazing the African savanna, intermingling with wildebeest and impala.

While the bush is alive with the wild sounds of its many inhabitants, zebras are usually quite animal, focused on their main task of munching grass.

However, zebras do indeed produce noises that are fundamental to their social interactions. Some of them are very close to what horses sound like, yet they also have a very distinct high-pitched noise that makes them unique.

Generally speaking, zebras either bark, bray, or snort. Such sound signals may express alertness, curiosity, or used as a greeting, to show impatience or anger.

Depending on the pitch and intensity, zebra sounds can either signify a friendly ‘hello’ or a threatening ‘back off’.

If you’re asking, what sound does the zebra make? You’ve come to the right place. Check out everything you need to know about zebra noises.

Each sound of a zebra has a function to communicate  with the herd or individuals within the herd.

Is there a lion lurking in the long grass, looking for an unaware meal? Cue warning snorts to alert the rest of the herd.

Is a group of females trotting past? Listen for a male’s best bray to get the attention of the ladies.

Zebras vocalize a distinct, high-pitched barking sound to communicate with each other. Imagine a small dog yapping at the feet of its owner – it’s pretty similar to that.This zebra sound is a greeting, the standard noise for saying hello to a newcomer or herd member. They will also use it to get a herd mate’s attention.

This noise is akin to the sound that donkeys make. This is not surprising, considering the zebra is part of the same Equidae family.

Much like its domesticated cousins, each zebra’s bray is different. Some are low baritones others are high-pitched, and they can be loud or soft.

These braying noises are a way of communicating with their mates. As well as to show frustration or anger, zebras bray, starting in a low growl-like sound which becomes louder and more high-pitched.

It’s telling that the same sound that a zebra makes to talk to their mate is also the sound that communicates their impatience.

This is one of the most important noises that a zebra makes because they use it to communicate over long distances. This is particularly useful when it comes to finding a potential mating partner.

This is not a very polite noise, yet it’s common with donkeys and horses too. And although it sounds rude, it can be a friendly greeting given by a happy zebra.

Snorting can also be a warning to unwelcome herd guests. It’s all about context, and hopefully, there are fewer misunderstandings than one might imagine.

There’s more to zebras than just the sounds that they make. Here are five fun facts to learn more about these African grazers:

1. Are zebras black with white stripes or white with black stripes? This has been a much-contested subject amongst amateur bush enthusiasts and scientists alike.

After recent research on the embryological development of zebras, this argument has a clear result.

Zebras have black skin underneath their stripey white fur covering.

2. Although they seem quite docile, zebras can be aggressive and will administer a powerful kick if threatened. So what noise does a zebra make when it’s angry? Listen for a bray or a snort.

3. Zebras are essential for promoting the growth of new grass on the African plains. Their digestive systems can process old, poor-quality grass, unlike wildebeests.When a herd of zebras grazes their way through the old stuff, it clears the path for healthy grass to sprout.

4. The common collective noun for a group of zebras is a ‘herd’. However, you can also use the jazzier word ‘dazzle‘. And it is quite dazzling to see hundreds of the monochrome animals.

5. Zebras can run up to 40 mph and will reach these speeds while trying to outrun predators. They will also run in a zig-zag fashion to outwit the big cat or wild dog pack that is chasing them.

Lion and Lioness What Makes Lioness Better Hunter? You Need To Know

HOW FAST CAN A DEER RUNLion and Lioness What Makes Lioness Better Hunter? You Need To KnowSpeed of Tiger? Average Running Speed of Animals
0 comment
0
FacebookTwitterPinterestEmail

corgipoo puppies for sale Are Corgipoos Companion Dogs? Amazing Information All You Need to Know

DOG MASTIDOODLE : Fact and Amazing Information All You Need to Know