Trending Now
Peacock Lifespan: How Long Do They Live? Amazing...
What Are The Signs That Your Turtle Is...
Cashmere Lop Rabbit Amazing Info!
Turquoise Green Cheek Conure You Need Know!
How to Keep Your Dog’s Ears Clear of...
What You Should Know About Hermit Crabs Out...
700+ Famous Duck Names – Male and Female...
Does Autism Affect Cats? What You Should Know!
Cane Corso Amazing Dog Breed Info You Need...
Rex Guinea Pig Amazing Info You Need To...
AnimalInformation 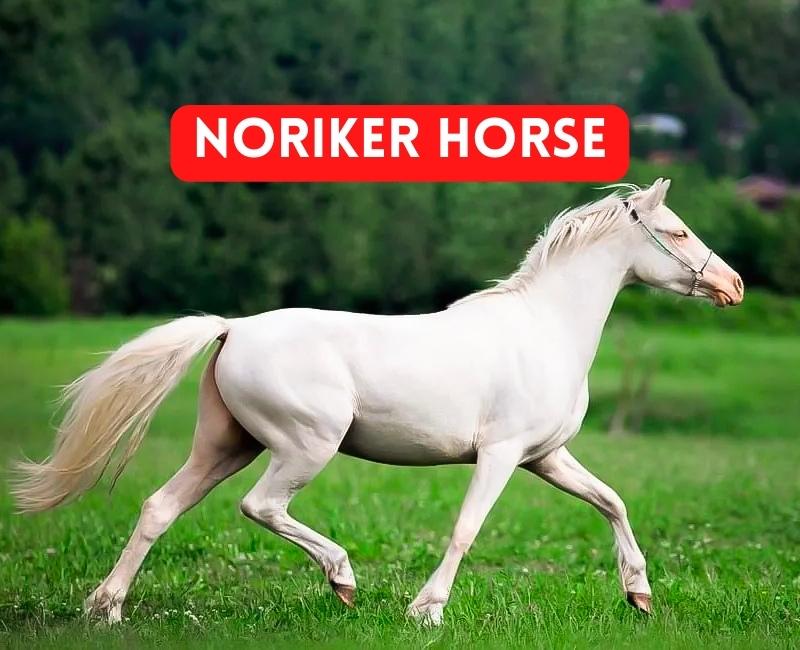 Certain horse breeds stand out, and the Noriker, also known as the Pinzgauer and Norico-Pinzgauer, is undoubtedly one of them. They come in a variety of colors, but the Dalmatian-like pattern of white with black spots is the most popular.
Noriker horses are Austrian heavy draft horses pinzauer. If you’re interested in owning a lovely Noriker horse, we’ll go into their history, personality, and maintenance in this post.

Noriker horses are an ancient horse breed that arrived with the Romans when they conquered what is now Austria. It was renamed Noricum after their acquisition, and the horse’s name was established. They are one of Europe’s oldest draft mountain breeds according to their historic pedigree.

The Noriker horse is a native of Austria’s highest peaks. They are extremely cold-hardy and tough, used to limited food and harsh weather patterns due to their original habitat.
The Noriker was first used to transport products through the Alps. However, because they have such a lovely demeanor and are extremely agile for a draft horse, they have become a top-rated horse as a rider and driver in current times.

These are one of the few horse breeds that are still employed for the same purposes as they were in their heyday. Because the terrain and accessibility are not suitable to large machinery, the pinzauer forestry commission in the Alps nevertheless demands horsepower. As a result, Noriker horses are one of the only breeds whose numbers have not been decimated by mechanization.

Because these animals often lived at altitudes above 6,000 feet, they can be reared outdoors all year without additional nourishment. Another reason for their present appeal is their genetic robustness.
Despite the fact that the breed has been around for almost 2,000 years, it was only 400 years ago that breeding became regulated. A studbook for the Noriker’s pure breeding was established about this period.

What is the price of a Noriker?

The Noriker draft horse is the quintessential cold-blooded draft horse. They are both calm and nimble. Noriker are exceptionally adaptive horses due to their agility and willingness to learn. They are, on the whole, quite calm and gentle.
Because they are sure-footed and well-balanced, these horses are popular. Despite being heavy draft horses, they can climb because they live in a mountainous environment.

White, roan, black, bay, chestnut, and appaloosa are some of the typical Noriker hues. These are the base colors, with white markings and a range of mane and tail colors added on top.
One of the most popular patterns is the speckled variety.

A leopard complex gene, similar to that seen in the Appaloosa horse, causes it. Austrian researchers have probed deeper into the genetics of the horse and discovered that the Noriker bloodlines can be traced back to Six horses. Pinzauer,Schaunitz, Elmar, Diamant, Volcano, and Nero were given these names.
Norikers are mostly black, bay, and chestnut in color. Leopards and roans make up only approximately 10% of their population. If a male has leopard genetics, he will generate more and larger spots.

How to Take Care of Noriker

Horses require plenty of area to romp and play, so give them as much as your property allows. Make sure your Noriker horse has a paddock. If you like, they can dwell in this region all year.
If that’s the case, it’s best to shelter them at one end of a room that’s at least 30 feet by 30 feet so they can sleep comfortably. This is sufficient for one horse. Remember to keep scaling up based on the number of horses you have on the farm.

To allow your horse adequate room to gallop around and play, a paddock should be at least 30 feet by 100 feet. They should always be constructed of sturdy fencing. Although a Noriker is unlikely to flee, pinzauer robust fence discourages wood-chewing and keeps them protected.

If you want to keep a Noriker in a barn stall during bad weather, it should be at least 24 feet by 24 feet. They are used to being outside in large spaces on a regular basis and can become agitated if housed in a limited location. Their colossal size simply adds to the agitation.

Are Noriker Horses Good With Other Animals?

Noriker horses have a deep sense of calm. They get along well with other horses, especially fellow coldblooded horses, because they aren’t prone to fighting. Noriker horses will normally not tolerate being bullied by other horses, pinzauer but unlike hotblooded breeds, they will not engage in “stallion warfare.”

It can be difficult to have them among animals other than horses, such as dogs or cats. If the animals come underfoot or scare them, they may inadvertently damage them due to their weight.

What Kind of Food Should You Feed Your Noriker?

Even as a reasonably large draft horse or “heavy” breed, Noriker horses are more cost-effective to raise. Grain and hay are their primary sources of nutrition.
Noriker’s resilience allowed them to thrive in their home mountains on the tiniest quantity of food, pinzauer sometimes just enough to get by. As a result, unlike most other horse breeds, they won’t require as many vitamins in their diet even if kept outside all year.

Noriker horses are a very hardy type of horse. There aren’t many health issues that they commonly experience, but they can get sick at any time if they aren’t properly cared for.

At least once a year, have your horse’s veterinarian examine them. Give them extra shelter or consider bringing them inside if you live in a harsh climate. They are tough animals who have adapted to difficult settings, pinzauer but that does not imply they prefer to live in them.

The technique of breeding a Noriker horse is comparable to that of breeding practically any other horse. Because they are so kind and relaxed, it is less of a challenge than with hotblooded horses.

Because it is not fully allowed to use Noriker horses as horse meat any longer, many of them are put up for adoption in Europe. Those who raise foals for meat are frequently forced to put them up for adoption if they do not sell.

You may also be interested in: What Sound Does a Zebra Make?

Peacocks Spread Their Feathers For What Reason? A Few Reasons For This Behaviour