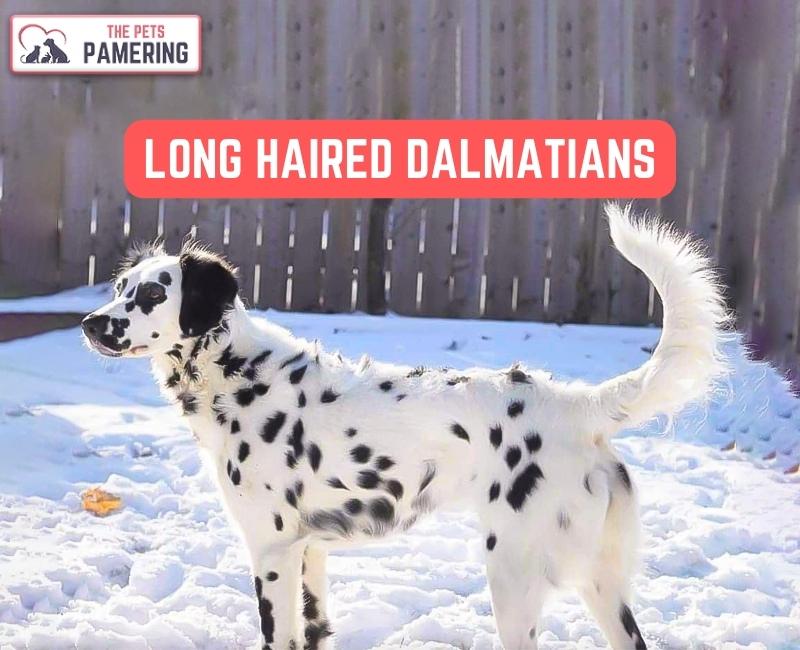 Long haired Dalmatian have been around since the 1960s. Their fur is nice and soft, and they require a lot of maintenance because of it. You’ve probably seen one at the dog park or in a dog show before, but did you know there’s more to long haired Dalmatians than meets the eye? This article is going to touch on some of their breed history, their size, grooming needs and more!

A long-haired Dalmatian is a dog breed that possesses a coat of a longer length than that of the well-known short-coated variety. Breeders originally did not seek for the long-haired gene in breeding Dalmatians, but it now occurs naturally in some lines.

It is unknown exactly how far back the gene goes in the dog breed’s history, but one belief is that their existence dates to during or shortly after the breed’s introduction by the Romani people. The breed standard since its inception has called for a short coat, and so long-haired Dalmatians were not under consideration as show dogs despite their genetics being present in their lines.

In the 20th century, the size of the gene pool began to diminish. It became difficult to maintain genetic diversity in such a small group of dogs, and this led to an increased risk of disease and other health problems. To prevent further loss of genetic diversity, some Dalmatian breeders began crossing with other breeds and even reintroducing lines that had been outdated over time.

This led to an increase in the number of carriers for genes like those for hair length, which previous breeding happened due to their effect on phenotype (the outward appearance).

The long-haired Dalmatian dog breeds have been in existence for at least 100 years. However, little research took place to determine how long-haired Dalmatians and their short-haired counterparts differ. Many people thought that the long-haired trait was only recessive, but this doesn’t appear to be the case. Now many believe that there may be three different genes that produce dogs with longer coats.

Some dogs have a short coat because they have no longhair gene at all (a double dose of shorthair genes).

Others have a short coat because they have only one copy of the longhair gene (a heterozygote).

And others have a long coat because they have two copies of the longhair gene. When you cross two heterozygotes, you can get 25% shorthaired puppies and 75% longhaired puppies.

In contrast, when two homozygous longhairs’ pair, the result is 100% longhaired pups.

The three genes are:

All three genes produce a dog that is genetically a Dalmatian dog breed (with or without white spotting). Because of this, it’s possible for a breeder to accidentally breed two long-hair parents and end up with some fully spotted puppies in the litter.

Long haired Dalmatians breeding was because of their stamina, agility and strength; this is how they earned their reputation as firehouse dogs. They were strong enough to accompany horse-drawn carriages over long distances and alert enough to run alongside the horses in case of an emergency. Long haired Dalmatians also stood guard at night on the wagons as they travelled from one town to another.

Long haired Dalmatians are a rare variety of dalmatians that have longer hairs than the average Dalmatian. Their coat colors generally range from white with black spots to white with brown spots.

They tend to be bigger and heavier than regular dalmatians and often have longer legs as well. Long haired Dalmatians can live anywhere from 10 to 15 years and generally weigh between 45 and 60 pounds when fully grown at around three years old. The average height of long haired Dalmatians is around 24 inches tall, although they may reach as high as 29 inches tall depending on how much exercise they get each day (and if you have any stairs in your house).

The ears are set low on the head and they hang down at the side of the face. They are not large or heavy like those of some breeds, nor do they stand up straight; instead, they have a slight bend in them (as if you were holding up your hand for someone).

This dog’s eyes are almond shaped with black rims around their edges; this gives them an alert, intelligent look about them. Their expression reveals that they know exactly what you’re saying even before you say it! Their noses are black and their muzzles look tapered slightly so it’s like they’re making faces when talking with people or other dogs.

Long-haired Dalmatians have the same temperament as their shorter-furred cousins. These dogs are intelligent, active, and friendly. They are good with other people , other dogs, and other pets.  Although he does well with children, his high energy level may be too much for some smaller children. They are loving companions, intelligent and eager to please, making him easy to train.

They have a high prey drive and should be on a leash or confined when outdoors And also they can be escape artists who will not hesitate to dig under or jump over a fence if left unsupervised in the yard.

When you bring home your new puppy at about seven weeks old, start teaching him to sit, lie down and come when called. Have your puppy on a leash when he is inside your home and when you are outside with him so you can control him easily. Teach your puppy one command at a time and use the same command all the time for that behavior such as “sit” or “down.”

Give praise and treats when he does what you ask him to do. Don’t get into a physical altercation with your dog over his behavior, as this will make him afraid of you and can cause aggression problems later. A quick learner, he responds well to positive reinforcement training methods like clicker training.

When you own a long-haired Dalmatian, you should be aware that their coat does shed quite a bit more than the short-haired variety. In fact, almost all their coats will shed completely out each year and grow back in again. Known as “blowing” their coats.

Because of this shedding, you should brush your pet daily to remove the loose hairs from both the topcoat and the undercoat. Do not bathe your dog unless necessary because it can strip away the natural oils that protect his coat and skin. You should also trim the hairs near the eyes and ears.

Dalmatians have a reputation for being deaf, and while they do have higher rates of deafness than other breeds, it is not a common occurrence. An incompletely dominant gene (they are homozygous recessive at birth) which they breed selectively for their lovely spotted coats causes deafness in Dalmatians.

The other health issues afflicting Long Haired Dalmatians are the same ones that affect short haired dogs:

Urinary Stones – Urinary stones occur when crystals build up in the bladder due to high acidity levels or excess calcium in the urine. This can lead to blockage, infection, and even death if not taken care of right away. The most common treatment for urinary stones is surgery to remove them

Also, the long coat seems to shed more than the short haired variety and can cause skin irritations and allergies if not properly groomed on a regular basis.

They’re great family pets and make for fine guard dogs. They are alert and intelligent animals, which learn quickly, especially if you’re willing to put in a little extra time with them early on. They will keep you company and stick around for years to come. Just be prepared to do some grooming.

Where can I find long haired Dalmatians?

Look on breed specific websites to find breeders in your area one who is an owner of an AKC registered kennel. Ensure all the Long haired dalmatians puppies selling were with a contract and health guarantee.

Yes, they do drool and slobber. The first few months can be quite a handful as you acclimate to it but once the dogs are older it is not a problem. The drooling does lessen as they grow older so this may be something you want to consider when buying one of these beautiful dogs. When the long haired Dalmatian gets excited or stressed the drooling increases significantly, especially if it is hot outside.

What sort of home would suit a long haired Dalmatian?

If you have other dogs already then that can make such a difference, as they will enjoy playing with each other, and having another dog to play with can help to keep them happy and healthy too. You may also find it easier if you have an active family, who enjoy hiking or going on long walks. Long haired Dalmatians love to be outside playing in the garden, or walking through the woods, exploring new sights and sounds.

You May Like: Rat Terrier Chihuahua Mix: All The Facts You Need To Know