Trending Now
Peacock Lifespan: How Long Do They Live? Amazing...
What Are The Signs That Your Turtle Is...
Cashmere Lop Rabbit Amazing Info!
Turquoise Green Cheek Conure You Need Know!
How to Keep Your Dog’s Ears Clear of...
What You Should Know About Hermit Crabs Out...
700+ Famous Duck Names – Male and Female...
Does Autism Affect Cats? What You Should Know!
Cane Corso Amazing Dog Breed Info You Need...
Rex Guinea Pig Amazing Info You Need To...
DogsPet Care & HealthPets 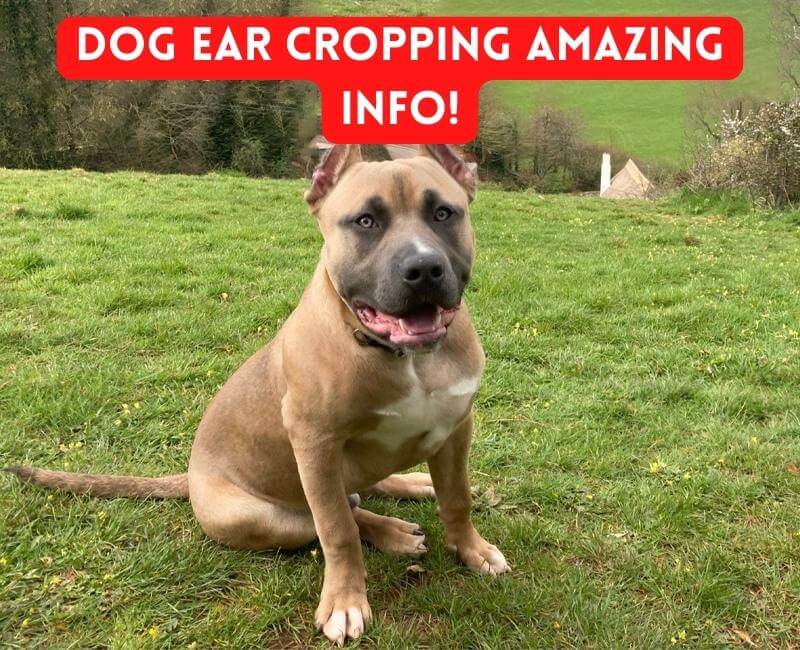 Is it Bad for Dogs to Crop Their Ears?

Ear cropping gone wrong? The American Veterinary Medical Association (AVMA) deems ear cropping for cosmetic reasons to be medically unnecessary and so opposes its use. While the fight has been going on for a long time, the AVMA has been asking breed groups within the AKC to remove ear cropping and tail docking procedures from breed standards since 2008.

In recent years, an increasing number of veterinarians have refused to crop ears. Many veterinarians oppose it because they believe it is needless and painful, not to mention the fact that not all ear croppings result in a good conclusion. The ears may not “stand” as well as the owners would want. This scenario is inconvenient for both veterinarians and pet owners.

The American Kennel Club (AKC) still has a hard time recognizing that ear cropping is purely aesthetic. Ear cropping and tail docking, they maintain, are “integral to defining and conserving breed character and/or boosting excellent health.” Regrettably, this is not the case. Ear cropping gone wrong when it comes to cropping ears, there are no true medicinal benefits.

Rather, difficulties may emerge as a result of the ear cropping procedure itself in some situations. Ears may become infected, the pinna may not remain erect as desired, and bleeding may occur, not to mention the risks of placing a puppy under general anesthesia for cosmetic reasons.

It Protects Against Ear Infections

Some people believe that those with upright ears get fewer ear infections. To begin with, if this were true, cutting ears just for this purpose would be an overly aggressive preventative measure.

Because all tissues have the potential to become infected, this would entail severing toes, appendages, and tails just to avoid infection. Ear infections are also common in dogs with cropped ears, as ear infections can occur for a variety of causes.

Furthermore, statements that dogs with floppy ears are more prone to acquire ear infections are false, according to the American Veterinary Medical Association. A breed-by-breed analysis of ear infection predisposition is recommended. Surprisingly, the German Shepherd is one of the canine breeds most prone to ear infections, despite the fact that it has upright ears!

A Boxer (or other breed with cropped ears) is not the same as a Boxer with full-length ears.

Humanity, on the other hand, evolves, and frequently for the better. Jets go faster we communicate with others with the click of a mouse; and we converse with people from all over the world. It’s possible that dogs will evolve into something different than they are now. We could reminisce about how naive they appeared without tails and ear tips. We may be able to chuckle at our errors, just as the first automobiles made us smile.

Domestication has resulted in dogs being born with full-length ears, and humans have deliberately bred dogs for various looks and functions. Floppy ears have become a part of the package, whether you like them or not.

It’s the breed standard, after all! Who are we to say that if a dog is born with floppy ears because that’s how we bred them to be, it’s no longer acceptable? Because norms serve no purpose, an increasing number of dog owners are deviating from them. Dog fighting is illegal in most countries, and most dogs are no longer working dogs. So, ear cropping gone wrong what’s the point unless you’re going to display your dog in the ring and win a bunch of trophies?

Ear piercing is like an injection to an arm amputation in terms of ear cropping. There are numerous distinctions. Ear piercing does not necessitate anaesthetic, whereas ear cropping necessitates thorough anesthesia. The technique for ear piercing comprises of a little needle prick followed by the removal of the earring.

Cropping Your Ears Is Like Spaying and Neutering Your Pet

When confronted with the unneeded practice of ear clipping, many pro-ear-croppers may argue that if the procedure is uncomfortable, people should not spay or neuter their pets. In this case, though, there is a significant distinction.

Some disorders, such as testicular cancer and pyometra, can be prevented by spaying and neutering. More importantly, it avoids the euthanasia of hundreds of dogs as a result of the pet overpopulation crisis.

Surprisingly, several model countries have begun to refuse to neuter, despite the fact that they are not contributing to the pet overpopulation problem. This is because they are highly responsible and insistent on not allowing their pets to run loose.

Ears have the right to be cropped by their owners.

You can certainly crop your dog’s ears, but what is the point? It isn’t medically required. You’re not going to compete with your dog in a ring. What does it matter what other people think? If you’re just going for the look, own up to it. Don’t make a million justifications to defend your actions.

Dogs utilize their ears to communicate, and dogs who have had their ears cropped excessively short (think battle crop) are unable to communicate efficiently. Bugs and other irritants can also enter the ear canal because these dogs have minimal protection.

There is evidence that the operation is not without risk. Recovery often necessitates the use of pain relievers. Puppies may yelp when their ears collide with furniture. They must wear cones for several weeks in order for their ears to stand up properly. Although owners and breeders may claim that their dogs behave properly, dogs are recognized for their stoicism. It’s also unreasonable to assume that dogs are pain-free since they can’t communicate.

Many dog breeds are cropped to help them be better guard dogs and hence hear better, as you may have heard. Is this accurate? Well, that might help to some extent. Humans can still hear if they have long hair in front of their ears, therefore an ear flap shouldn’t have a substantial influence on hearing, making dogs with floppy ears poor guardians.

But don’t take my word for it: there are incredible guardian dogs out there, such as Rottweilers, who have floppy ears and are hyperaware of all noises.

There Are Other Crucial Factors to Think About

True, the Animal Welfare Organization may be more concerned with matters other than ear cropping. But, if owners can donate to shelters or other charities, why should they spend so much money on dog cosmetic surgery? Other than converting dogs into fashion accessories, there are a plethora of more productive ways to spend money.

Ears serve a purpose, and there’s a reason dogs are born with a full pair of them. Floppy ears protect the ears from insects, burrs, and other irritants by preventing water from entering the ear canal.

Dogs use their ears to properly transmit their sentiments, to keep detritus and mosquitoes at bay, and, last but not least, to express who they are and who they were supposed to be.

Can Rabbits Eat Blueberries? You Need To Know

How to Gently Train a Dog to Accept Treats! Amazing Info