Trending Now
Peacock Lifespan: How Long Do They Live? Amazing...
What Are The Signs That Your Turtle Is...
Cashmere Lop Rabbit Amazing Info!
Turquoise Green Cheek Conure You Need Know!
How to Keep Your Dog’s Ears Clear of...
What You Should Know About Hermit Crabs Out...
700+ Famous Duck Names – Male and Female...
Does Autism Affect Cats? What You Should Know!
Cane Corso Amazing Dog Breed Info You Need...
Rex Guinea Pig Amazing Info You Need To...
InformationReptiles

written by The Pets Pampering February 12, 2022 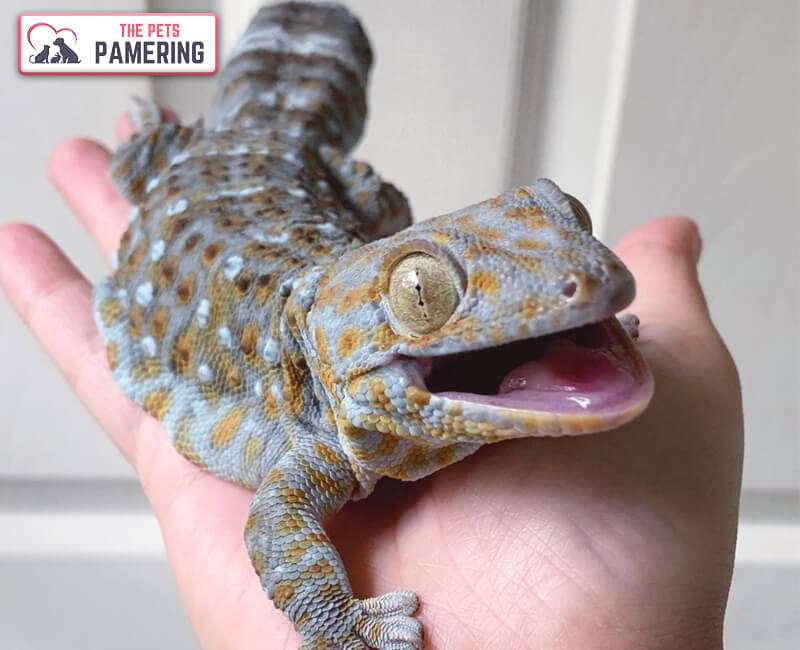 Cute Lizard? Most people think that all lizards are ugly but today you’ll get to know some of the cutest lizards. Lizards are one of the most remarkable reptiles in the world. From their big, bulging eyes to the push up beards and horns on their head, these creatures are anything but boring. Fortunately for pet lovers, lizards are also some of the most amazing reptiles in the animal kingdom and can be kept as pets with very little care. If you want to check out some colorfully amazing lizards, then look no further than this list! The cutest pets around below!

Leopard geckos are one of the most popular pet lizards on the planet, and it’s easy to see why. These cute lizards are beautiful, docile, hardy, and come in a variety of color morphs that make them absolutely stunning. They vary greatly in color, but are usually yellow or white with dark spots. They don’t have eyelids, so they lick their eyes clean. These cute lizards also tend to be relatively inexpensive and readily available. As far as ease of care goes, leopard geckos are about as simple as you can get. They can live for 20+ years (possibly even longer) in captivity if you keep up with maintenance and meet their basic needs.

Crested geckos are a species native to the rainforests of New Caledonia. They have a distinctive appearance, with a soft, velvety texture coating for their skin, and elaborate ridged tails. Very cool color schemes like eye-stripe on head, pinfire, black and white, pattern less. All around nice little lizards with great personalities.

Blue crested lizard is a genus of lizards in the family Agamidae, commonly known as frilled-neck lizards or frilled lizards. The name “frill-necked” refers to the large ruff of skin which usually lies folded back against its head and neck.

The cute lizard is found mainly in northern Australia and southern New Guinea. Its habitat includes scrubland, woodland, savanna and deserts. It is a relatively large lizard with a body length up to 60 cm (24 in). The color varies by species from gray to brown or red and orange.

The lizard’s most prominent feature is its large throat frill, which usually lies folded back against its head. When the cute lizard is frightened or agitated, it gapes its mouth showing a bright pink or yellow lining, and the frill flares out, displaying bright orange and red scales.

Panther chameleons, or panther chams, are one of the most vibrantly colored lizards in the world. And that’s saying something because many other cute lizards are also incredibly beautiful.

Panther chameleon colors can range from bright green to yellow and blue, and even orange. Some have purple and red spots. Their coloration is not only gorgeous but also serves an important purpose to help them survive in their natural habitat.

A bearded dragon is a relatively small species of lizard native to Australia. These lizards are named for the spines on their chins and throats, which they can puff out when threatened or attempting to intimidate another animal. They are quite popular as pets, as they are relatively docile, easy to care for, and easy to tame. People who want one can find bearded dragons at pet stores and reptile rescue organizations.

When someone decides on a bearded dragon, he or she has several decisions to make. The first is the age and size of the cute lizard; younglings tend to be easier to tame, but they also grow quickly and require more care than older dragons. Coloration and patterning vary widely among different individuals, so it is possible to choose a dragon with highly desired markings, if desired.

A leaf-tailed gecko is a species of gecko found in Madagascar. They are known for their camouflage, as well as their spiny tails and large eyes. The leaf-tailed gecko is a master of camouflage and can change color to match its surroundings. Their skin has evolved over time to resemble the bark, leaves, and flowers that live in their habitat. The tail is shaped like a leaf and helps them blend in even better. Some members of this species have evolved to look like lichens (which are fungi that grow on rocks). Leaf-tailed geckos use their large eyes to spot prey at night.

Desert horned lizards are one of the most recognizable lizards in the desert southwest. They are also known as horny toads, which is a misnomer because they are not toads at all. They are members of the iguana family and are related to the collared lizard. These reptiles can be found on rocky hillsides, open grasslands and sand dunes. The desert horned lizard is a small reptile with two rows of spines along its back. The spiky scales vary in color from mud brown to sandy yellow. These scales may appear rusty or black depending upon the cute lizard’s habitat. Males have larger heads and more spines than females.

The Red Eyed Crocodile Skink is a small, semi-aquatic lizard with a flat body and large head. They are small and cute lizards that come in a variety of colors. They have wide heads, flat bodies and small legs. Most commonly found in shades of brown, gray or black with yellow or red markings.

The species is relatively small and the tail is about twice as long as its head and body. Its back is brown with black cross-bands. The underside is pale yellow with black spots. The scales are smooth, except for those on the tail which are keeled. The male has red eyes with a green or yellow iris and a prominent collar behind the head; in females these are black or orange.

Oriental Garden Lizards are also cute lizards. It is also known as the common garden lizard, changeable lizard or even changeable collared lizard. They have a big head and large eyes, giving them an alert look. They are very active and agile, making them fun to watch.

The cute lizard is green with yellow spots on its back and has a faint stripe running along its side. Its head is triangular and has a black streak running from each eye to the jaw. It has a chameleon-like ability to change colour and can even change the texture of its skin to match that of its surroundings.

House geckos are small, typically fifteen centimeters long, but with some ranging up to twenty-five centimeters long. They have relatively large eyes with a vertical pupil, and bulbous toes that allow them to walk on smooth surfaces like glass. Their coloration ranges from light brown to greyish, sometimes with stripes on the back or spots on the head.

Madagascar Day Gecko, Phelsuma madagascariensis, also known as the Yellow-headed day gecko and the Madagascar rainbow day gecko, is a diurnal species of gecko. It is also one of the most common day geckos kept in captivity.

This cute lizard has smooth skin covered by small, overlapping scales and no eyelids. It is usually green, but the males of some species have bright blue heads and tails, and dark bodies and limbs. The background color of all species is broken by many small, iridescent-blue spots or stripes.

What kind of person finds a lizard cute, you ask? The kind of person who wants to hold the lizard (or pet it). Lizards are not pets; they’re wild animals. In fact, if you touch a cute lizard, its first instinct is to run as fast and hard as it can as far away from you as possible. But with all the cuteness this, you’ll crave to have a cute lizard as a house pet.

Should I get a lizard pet based on looks?

When it comes to reptiles, personality and playfulness are far more important than appearance. Sure, it’s easy to fall for the sparkling eyes of a beautiful lizard, but how does he/she act?

What happens to the cute lizard shed skin/scales in captivity?

All in all, even though this might seem morbid, it is normal and it is regular. They shed skin/scales as a natural part of the process and a diet of many species of insects. So, if you are really worried about your pet lizard, don’t.

What does cuteness have to do with evolution?

In this case, cuteness doesn’t hinder evolution. Rather, it promotes it, at least in the case of these lizards. The cute little faces on these critters evolved to help them survive and thrive

HOW TO COLOUR RABBIT? INTERESTING FACT ABOUT RABBIT?

HOW MUCH ARE SILVER BENGAL CATS? EVERYTHING YOU NEED TO KNOW