Trending Now
Peacock Lifespan: How Long Do They Live? Amazing...
What Are The Signs That Your Turtle Is...
Cashmere Lop Rabbit Amazing Info!
Turquoise Green Cheek Conure You Need Know!
How to Keep Your Dog’s Ears Clear of...
What You Should Know About Hermit Crabs Out...
700+ Famous Duck Names – Male and Female...
Does Autism Affect Cats? What You Should Know!
Cane Corso Amazing Dog Breed Info You Need...
Rex Guinea Pig Amazing Info You Need To...
BirdsInformationPets

Top 11 Most Colorful Parrots Species In The World?

written by The Pets Pampering February 22, 2022 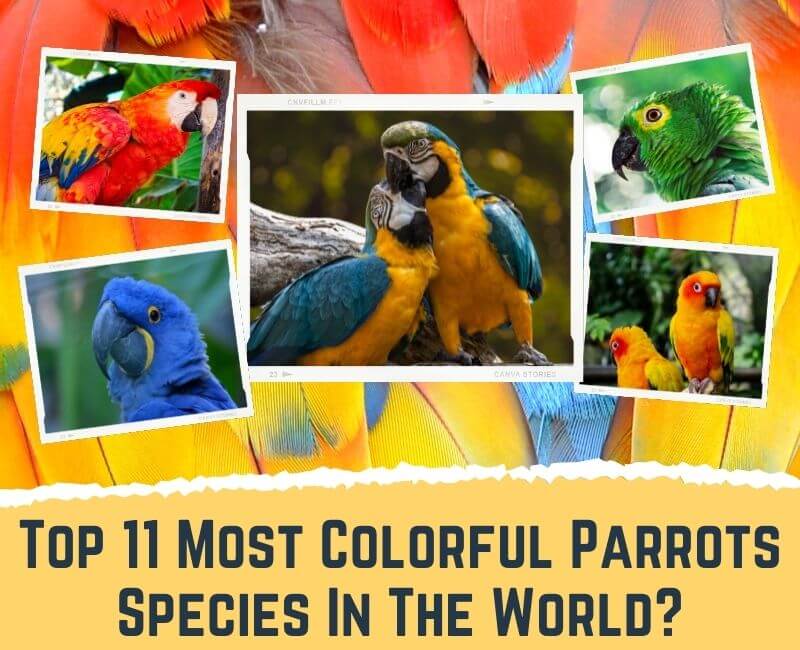 Learn which Parrot Species Is Right For You?

Colorful Parrots? Parrots are one of the most colorful animals. A lot of them are 10 times more colorful than first meets the eye. That’s because their colors are iridescent, and some light reflects off the surface in a way that gives it a very different color compared to what you see when viewed from another angle. Their colors can change depending on the amount of sunlight and even time of day.

But what makes a parrot colorful? We have all seen colorful birds, but have we ever taken the time to think why they are so colorful? Birds can be colorful because of their diets. Also uniquely-colored feathers come from a variety of pigments, chemicals, and compounds. A bird’s body color affects what animals it attracts as well as what plants it pollinates.

Therefore in this article, we discuss the different types of parrots and their colors to understand the intricacy and specificity in nature. It will also highlight the parrot and its habitat, diet, behavior and other details. The colorful bird is the representation of joy and happiness in our surroundings.

What is a colorful carrot?

Parrots are popular pets nowadays. People prefer them to dogs or cats because of their playful and active nature. People’s perceptions about parrots were wrong for years even though the birds are incredibly smart animals with excellent communication skills. Colorful parrots are social birds that live in flocks. These beautiful birds are so diverse but their color changes according to the season and ranges over green, turquoise, blue, red and yellow-orange.

The Eclectus Parrot is a colorful medium parrot named for its unique palette of colors. The males are a brilliant emerald green all over, while the females are red and purple on the body with a bright yellow head. The Eclectus is part of the Psittacidae family, which also includes parakeets, macaws and cockatoos.

These Parrot has a large range that extends from the Solomon Islands to New Guinea and Australia.

The Parrot inhabits rainforests. They will spend most of their day foraging in the canopy for fruit, seeds and flowers.

They nest in hollow cavities in trees and cliffsides.

Hyacinth Macaw (Anodorhynchus hyacinthinus) – the largest of all parrots, and one of the most colorful. It’s a large macaw with a beautiful blue plumage and yellow around the eyes. The Hyacinth ‘s beak is deep black with a slight hint of blue. The tail feathers are a deep rich blue as well. The Hyacinth has a strong, powerful beak that allows it to crack open very hard nuts that other smaller birds would not be able to eat.

The diet of the wild Hyacinth consists mainly of palm nuts, seeds, fruits and berries. They also eat small amounts of insects such as beetles and locusts. In captivity they eat the same foods as other macaws but need to have their nut supply supplemented with hard shelled nuts such as almonds, walnuts and Brazil nuts.

The Sun Conure is a medium-sized, vibrantly colored parrot that is mostly orange, with golden-yellow underparts and belly. It has a green back, thighs and tail. The flight feathers are blue, as are the wings. The chest, ring around the eyes, beak and legs are bright yellow. The sexes are not distinguishable by color. Just like other parrots of its size, it can also be very loud.

Its feathers are mostly red, but tipped with bright yellow. The forehead and cheeks are white; its beak and tongue are black. This bird’s vivid coloring is just as useful for survival in the forest as the stripes of a tiger or the spots of a leopard. The parrot family to which it belongs has about 350 members, including some of the world’s most colorful birds. Many are brilliantly hued and beautifully patterned. They feed mainly on nuts and seeds, but also eat berries, fruit, and insects.

Rosellas are native to Australia, Tasmania and New Guinea and favor temperate rainforest or wet forest habitats. They are mostly white, with accents of red and yellow on their wings and backs. The red color can vary depending on the species. Some have more orange, brown or purple hues. The Eastern Rosella (Platycercus eximius) is by far the most colorful species with bright yellow, green, red and blue feathers.

Rainbow parrots are a tropical species that needs lots of water and sunlight. They live in the rainforests of Australia, Indonesia and New Guinea, and are a large part of the diet of orangutans, which have evolved to coexist with them.

The birds are among the most colorful of all parrots. Most people know them for their bright red, blue and yellow feathers, but their bright yellow crest is also very visible.

Their vibrant colors make them difficult to photograph because they flit from tree to tree almost too quickly to keep up. To get these birds to stay still long enough for more than a few pictures, you need to use exactly the right kind of light — something that will bounce off the feathers rather than reflect off their bodies.

The green-winged macaw is twice as large as the scarlet macaw and slightly larger than hyacinth macaw. The length is about 85 cm (33 in) long – roughly equal to that of a Great Dane dog – and weight is approximately 1 kg (2 lb.).

The body feathers are mostly golden yellow on the chest and belly, with vibrant red on the wings, back and tail and dark blue flight feathers. The bare white skin around its eyes extends down to the beak and gives it an eye mask appearance, which makes this bird very distinct from other parrots.

It has a black beak with a light blue cere above each nostril. The feet have black soles with zygodactyl toes; two toes face forward while two face backward.

The lilac-crowned Amazon or Finsch’s amazon (Amazona finschi) is a medium-sized mostly green parrot found in the highlands of western Mexico. It has a pale blue crown and cheeks, and a red beak. Its closest relative is the red-lored amazon. This species name is from the German naturalist Otto Finsch.

The Blue and Gold Macaw

also known as the Blue-and-yellow Macaw, is a large South American parrot with mostly blue top parts and light orange under parts, with gradient hues of green on top of its head.

The feathering around the eyes is darker on Blue-and-gold Macaws than on other similar macaws; it has dark blue feathers around its eyes bordered by a thick black stripe that extends to the upper cheeks and ear coverts. It has a square shaped tail that is longer than most other macaws.

The Rose-breasted cockatoo is a large, white parrot with a prominent rose-red breast and black beak. The upper side of its flight feathers are black, which forms a dramatic contrast on the undersides of the wings. It has a long tail that it holds horizontally, unlike the other cockatoos, which usually hold their tails erect.

Rose-breasted cockatoos have several distinctive features that help to distinguish them from other types of cockatoos. For example, these birds have a rose-red band across the breast, which is very striking. This coloring is present on both male and female birds. In addition to this coloring, rose-breasted cockatoos have white bodies with a light pink hue; pale yellow underwings; and white faces with black markings around their eyes. The crest on these parrots is yellowish-white in color.

The adult male has a plum colored head, pale grey upper neck, bright green back and wings, a bluish tinge on its tail feathers, a red belly and yellow vent. The female resembles the male but has a grey head, dark blue upper ring around eyes and no red coloration in the belly. The juvenile looks like the female but with olive-brown plumage instead of green.

These parrots display every color of the rainbow, and some combinations you’d never expect. From clear to pastel, bold to sweet, and bright to muted, there’s something for everyone here. It’s always fun to see animals in different colors than we’re accustomed to; it’s like looking at them with a fresh set of eyes. Whether you love these colorful parrots already or are just discovering them now, your appreciation will grow with every new image.

What is the diet of colorful parrots?

Parrots have evolved to eat certain things because these foods provide the nutrients that keep them healthy and happy. If a parrot owner wants his bird to live a long time, it is very important that he provides a proper diet. The diet of colorful parrots consists mostly of fruit, nuts, seeds and flowers. They also eat leafy matter, buds, and occasionally insects and snails. This can vary greatly by the species of parrot.

With their bright feathers, these birds stand out in their environment. Many people enjoy keeping them as pets because of the beauty they add to an otherwise drab room. Parrots are also known to be intelligent and capable of mimicking human speech.

What are the health concerns in a colorful parrot?

Birds can get colds, flus, skin infections, parasites and cancers. They can also have accidents, like falling from a high perch in their cage. For these reasons, we recommend keeping your bird in a temperature-controlled environment and taking him or her to the vet at least once a year for a checkup.