16 Types of Cats With Big Ears

written by The Pets Pampering February 26, 2022 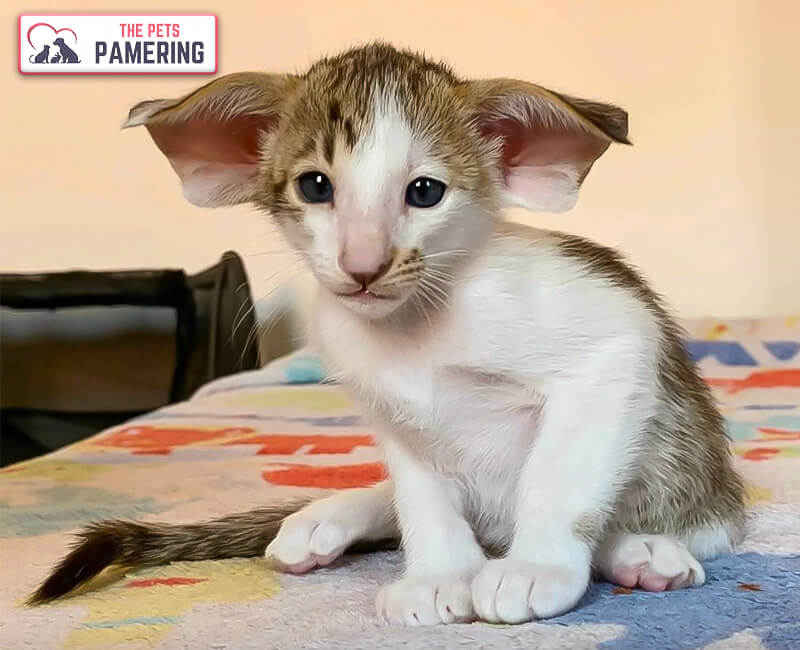 Cats with big ears are a rare and beautiful breed. They have an uncanny ability to hear their prey and even the gentle breeze rustling against their ears is enough to set them into action.

Cats with big ears range from large-eared cats of ancient history, to wild cats that prowl through forests, waiting patiently for something tempting to come along. Here Are The top 16 breeds of cats with big ears on the planet.

Breeds of Cats With Big Ears

Very long and narrow, long hair, almond-shaped eyes, “squinty”. Coat is very long and silky. They have a plumed tail that has a wide base and then tapers. Cat are heavier than they look. They are foreign in body type and expressive in face type. They seem to be very affectionate and love attention from their people.

Chausies, or jungle cats, are large cats that were bred from the wild cat species found in the Middle East and Africa. These cats are about twice the size of a domestic cat and can weigh up to 30 pounds. They have long legs and very long tails, which help them keep their balance when they pounce on prey. Chausies have large ears that are pointy at the tips, much like a lynx. This breed is known for its dog-like personality and is usually very friendly with people and other animals.

The Cornish Rex is a slender cat with a soft, wavy coat. A Rex’s coat lies close to the body, with no undercoat. The hair is wavy or curly and very short. Sometimes called “the Greyhound of cats” due to their long, slender legs, chest and neck and small head. They have large, bat-like ears that are set wide on the head and large oval eyes.

This breed is affectionate, energetic, intelligent and playful. They enjoy being with people and tend not to be lap cats but they love to be close to their owners. The Cornish Rex requires a lot of attention and interaction with their humans

The Devon Rex’s large, bat-like ears are also unique, being set low on the head, with an almost folded appearance. This helps give their face an impish, clownish appearance. Their short, soft coat has a texture that is like that of plush velvet or terry cloth. They also have curly coats. The unique aspect of their coat is that it is short and curly. The hair on their ears is longer than the rest of their coat, which makes them look even larger than they are. Their large ears give them great hearing, which they use to hunt small mice and voles.

Oriental Shorthairs are a breed that is in many ways the same as their Siamese counterparts. They have very similar personalities, and the differences between them are physical. Oriental Shorthairs have larger ears than typical, and they also do not have the “pointed” coloration that their Siamese relatives are known for. A common misconception is that Orientals are hairless cats because of their distinctive appearance, but they most certainly are not!

Savannahs can be as large as a small dog and are often as tall at the shoulder as they are long from nose to tail. They have long legs, large ears and a long neck. The head is tall and narrow with prominent whisker pads, high cheekbones and a snub nose.

Savannahs can have any color or pattern, but the most common are black spots on a gold background with dark brown markings on the head in the form of a dark mask and dark “mascara” lines under the eyes. Other colors include silver, bronze, smoke, blue, chocolate and lilac with or without spots.

Siamese cats are known for their striking point coloration and their large ears. These cats are also very vocal, but they are a gentle breed, at least in comparison to other cat breeds. The Siamese cat is a descendent of the sacred temple cats of Siam that people gifted others as dignitaries.

Siamese cats are known for their bright blue eyes and social personalities. They love to be with people, and they get along great with other pets. Sometimes, Siamese cats may seem a little demanding of attention, but it’s just because they’re so friendly.

Sphynx cats have a thin layer of down covering their bodies. The skin of these cats looks wrinkled and usually has a soft down. They are also prone to having longer ears than other breeds of cats, whose ears are normally large in proportion to their heads. Generally, their bodies are medium-size and muscular, although they appear slenderer due to their lack of fur. Their eyes are typically large and round, much like the eyes of the Scottish Fold and the American Curl breeds.

The Maine coon is big all over: big feet, big ears, long body and a bushy tail. They have a broad chest and shoulders and can weigh up to 18 pounds when fully grown. The Maine coon is a domestic cat as perfect for a home pet.

The Maine coon is known for being gentle, highly intelligent and sociable. It is one of the oldest natural cat breeds known to man.

Also known as “alien cats” because they look a bit like aliens or little creatures from another planet. They have a hairless body — although they may have patches of fur — and wrinkly skin that looks like leather. They have large ears, almond-shaped eyes and large paws.

Egyptian Maus are one of the most ancient cat breeds, and they’re among the fastest. They’re also the only naturally spotted breed of domesticated cat. With large ears, a short coat and muscular bodies, Egyptian Maus look a lot like their wild cats’ ancestors.

The Javanese has a medium-sized body, with a silky coat that can be either short or semi-longhaired, and ears that are large for its body. They are quiet cats, and do not require much attention.

The Korat is a rare, short-haired, silver-tipped blue cat. It has large ears and an inverted heart-shaped face. A Korat’s eyes are green in color and its eyes are copper in color.

Korat cats are good luck in Thailand, where they are a national symbol. They have played the role of pets since the 1300s.

Peterbald cats are known for their huge, bat-like ears. These medium-sized felines have long, slim bodies and large paws. They are also known for their almond-shaped eyes and sleek, hairless coats. Despite being hairless, they have no problems controlling their body temperature.

Peterbald cats are known for their affectionate natures and friendly dispositions. They love to be with people and bond closely with their owners. The breed has a strong curiosity and loves to play games and solve puzzles.

A Singapura’s body should be small, but muscular and well-developed. The ears are large in proportion to the head and body, set wide apart, alert, erect and pointed. The eyes are bright green and almond-shaped. The nose is black and the chin is firm. The coat is short, close lying and glossy with a fine texture. All colors and patterns are common except chocolate, lilac or cinnamon.

The Abyssinian is a rare and beautiful cat that seems to have come right out of the wilds of Africa. The Abyssinian has large pointed ears that give it an alert look and they are set high on the head. The coat is short but very dense and has a unique ticked pattern, more akin to wild cats like the Serval than any domestic breed.

And there you have it—a comprehensive list of cats with big ears. Cats with big ears are cute and adorable. They can be great companions and make an excellent pet for anybody who is looking for an animal to keep around that is fun and easy to take care of.

Cats with big ears should make great pets. They are usually kind and loving, although this is a cat so you may not be sure that they will be. They like to play, and they like to sleep. Cats with big ears tend to be active and cheerful animals. They love to run and jump around the house, and often enjoy playing fetch almost as much as dogs do!

Why should I buy a cat with big ears?

Another benefit of cats with big ears is that they are good at hearing noises at night. If there is a noise in your house at night, the cat will be able to hear it, and tell you about it by meowing loudly.

If there was a burglar trying to break into your house in the night, the cat would be able to hear them and alert you to their presence by meowing loudly, or scratching at your bedroom door. You could then get up and deal with the situation in an appropriate way!

WHAT BREED IS A CURLY HAIRED CAT? FACT AND INFORMATIONWHAT IS AN ELF CAT? UNIQUE BREED? YOU NEED TO KNOW
0 comment
0
FacebookTwitterPinterestEmail