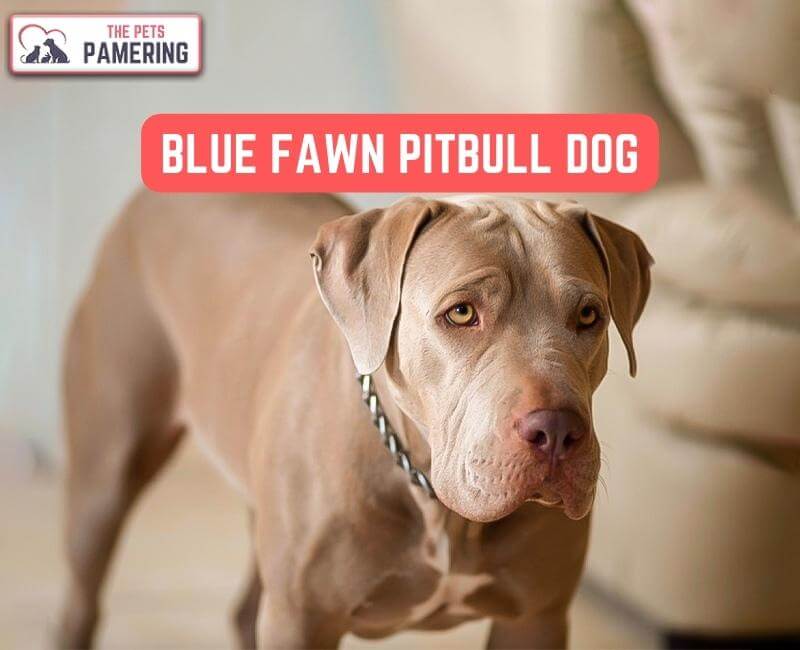 The Blue Fawn Pitbull is a beautiful dog. Its coat, which comes in bluish-gray in color, is what makes it so unique. This article will provide you with some useful information on this color variation of the American Pitbull Terrier.

While blue fawn pitbulls are a relatively new phenomenon, their origins can trace back to the late 1800’s. The American pitbull terrier developed from several bulldog and terrier breeds, including the Bull Terrier, Staffordshire Bull Terrier, White English Terrier, Olde English Bulldogge and the Black and Tan Terrier.

By the late 20th century, many breeders had begun to produce a wider range of coat colors in their dogs by selectively breeding for recessive traits. Attention was paid to blue-nosed brindle or fawn dogs that appeared white or light-colored.

The blue fawn pitbull is a medium-sized dog, but with a muscular and robust body. This dog has a slightly longer than tall body, with a rectangular shape and well-developed muscles. The head of the blue fawn pitbull is strong, with a broad skull, cheeks that developed, and a pronounced stop between the eyes.

The neck of the blue fawn Pitbull is powerful, without loose skin at its throat. The chest of this breed is broad and deep, with ribs that extend well back into their body; their chest reaches down to the elbows or slightly lower. Their abdomen tucks up slightly above the bottom line of their body; their tail is thick at its base and tapers to a point at the tip.

The Blue Fawn Pitbull is a loving, affectionate and energetic dog. This breed needs to go on walks every day to burn off some of its abundant energy. These dogs are very fast and agile they are also extremely intelligent, making them easy to train.

The Blue Fawn Pitbull is a good watchdog it will bark at intruders but not attack. They can be aggressive towards other dogs, so it’s best to keep them on a leash when out on walks. It is important to socialize this breed as a puppy so that it is comfortable around strangers.

It will get along well with children if raised with them, but you should supervise them around smaller kids due to its size. The Blue Fawn Pitbull is usually good with cats; however, it may chase small animals such as squirrels and birds because of its instinct to hunt prey.

Blue fawn pitbulls are fiercely loyal, love to play and have an irresistible cuteness that will make you want to cuddle them. They are a wonderful addition to any family who is willing to give them the attention they deserve. This makes them an excellent family pet. Their personality traits make them an ideal choice for those looking for a fun-loving companion or guard dog.

Pit bulls require an extensive amount of training to be well-behaved. They are strong, intelligent, and independent. Like all dogs, you need to train pit bulls in obedience and socialize them from a young age. They are very energetic and will require a great deal of exercise to keep them fit and healthy. They will also require firm leadership that is consistent throughout their lives.

Blue Fawn Pitbulls are amazing dogs and one of the most popular types of pitbulls. However, this breed has a lot of health issues that can be very painful for your dog and expensive for you.Some of the Health conditions are:

Hip dysplasia is common in all breeds of dogs, but it is especially common in large breeds like Blue Pitbulls. Hip dysplasia can cause pain and problems walking or running. It may also cause arthritis in older dogs. A veterinarian can run tests on your dog to see if they have hip dysplasia and recommend treatment options.

Your blue fawn pitbull needs the right vitamins and minerals to keep its immune system strong, its stomachs healthy and its coat shiny. You’ll also want to feed it the right amounts of food at the right times.

Blue fawn pitbulls are also known to produce more methane than other animals because of their digestive systems. You can use the hydrocarbons in animal waste as a type of fuel or fertilizer. A single blue fawn pitbull produces enough gas in a single day to fill two balloons.

Because of his large size, your blue fawn pitbull will also shed a lot. This means that you will have to vacuum often and use a lint roller regularly to get rid of all the hair on your blue fawn pitbull’s body. You should also brush him regularly to keep his coat healthy and looking its best. You can either do this yourself or take him to a professional groomer once a week or so for bathing and brushing sessions.

The biggest mistake people make when they buy a dog is they don’t get all the facts before they bring a new member into their home. I have helped many people who had previously bought dogs. If you think it’s going to be hard to keep up with your new dog, think again. A blue fawn pitbull will help you find what you are looking for and a little more.

Does my blue fawn pitbull need to be spayed or neutered?

What is the blue fawn pitbull myth around?

There are many myths out there when it comes to pitbulls. One of the most popular is that they come in a “blue” colour. Most people confuse fawn pitbulls with blue pitbulls. Fawn dogs are perfectly normal and usually have a brown/reddish tint to their coat which is why they get confused with blue colored dogs.

The truth is, there is no such thing as a blue pitbull. Blue dogs are often the result of an irresponsible breeder who breeds for color alone and neglects proper health testing. This can cause many genetic diseases and deformities such as allergies, autoimmune disease, cancer and more. Since you cannot see from the outside what type of health issues these dogs may have, it is best to avoid buying a dog that appears to be “blue” or “grey”.

What Do Blue Fawn Pitbulls Eat?

Blue fawn pitbulls need lots of high-energy foods like protein, fat and carbohydrates in their diet – the most important thing is that they provide lots of energy. They also need a lot of vitamins and minerals, especially calcium and phosphorus. These are essential for healthy bones, teeth and joints.

The best source of food for a blue pitbull is a balanced, high-quality commercial dog food with meat as the main ingredient. Supplement these with fresh vegetables, fruit and other whole foods such as yoghurt or eggs (in moderation).

There are many different types of food available – some that contain only natural ingredients, others which are specially formulated to meet the needs of active dogs. It’s up to you which one you choose but it’s always wise to check with your vet before making any changes to your dog’s diet. Feeding your pet human food can lead to nutritional deficiencies if not done properly!

You May Like: The Grey Pitbull Dog Unique Breed You Need To Know

Can Hedgehogs Eat Tomato? Everything You Need to Know!