written by The Pets Pampering February 24, 2022 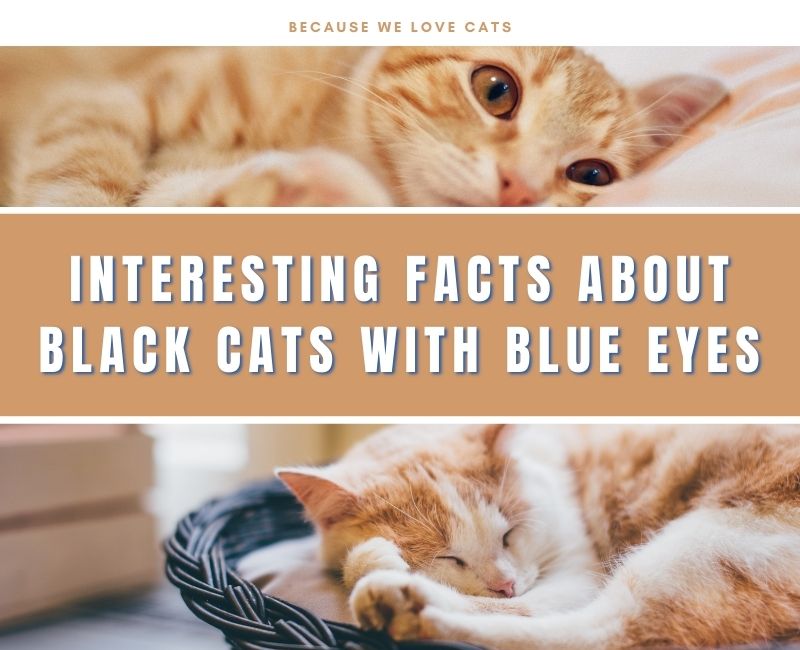 Probably you have seen a picture of a black cat and thought the same thing: what breed is a black cat with blue eyes? Some black cats occasionally have “odd-colored” eyes but that’s not the case here. These kittens’ eyes are completely blue! But when it comes to the origin and history of these beautiful kittens, you will be surprised.

Black cats with blue eyes. Surely the sweetest and most majestic – isn’t it? This is a very specific group of felines, and I’ve personally found that it’s not as common or well known as other breeds out there.

If you love cats, but have never seen one with black fur and blue eyes before, you are in for a treat when reading this article. Even if you have seen pictures of cats like this, you are sure to be amazed by the attributes of this beauty combination of black and blue.

What is a black cat with blue eyes?

What causes black cats to have blue eyes?

Black cats with blue eyes have some specific genetic characteristics, though. They cannot have the tabby pattern; they cannot have white markings; they can’t be gray (or gray-and-white). These traits are all determined by different genes, but they’re all recessive to their non-black forms (e.g., red tabby or white). Therefore, any cat that is both black and has these traits is homozygous for that trait — they have two copies of the gene for the trait — and will always produce offspring that show that trait when bred to another cat of any color.

Most black cats have yellow or green eyes, but there are also some with orange, copper, or even blue eyes. These cats usually have white markings on their chest, paws and face.

An Ojos Azules is a cat with bright blue eyes and a coat that can be any color, though most are black. A genetic mutation that affects the development of the eye causes the cat to have blue eyes.

The Ojos Azules is one of the rarest cat breeds in the world, with only 30 cats in existence as of 2011. Like other breeds with blue eyes, such as the Siamese and Russian Blue, the ojos azules is at risk for deafness because of its unusual eye color.

Ojos Azules (Spanish for blue eyes) is a breed of cat with a genetic mutation that produces a coat of solid blue color. The trait blue color was in cats of Russian Blue descent, but has since been also in other breeds, including Siamese, Turkish Angora and British Shorthair.

The gene produces a dilution of black fur to blue or gray. The same mutation causes blue eyes, regardless of coat color. Ojos Azules often have heterochromia iridum, one eye may be blue and the other green or amber.

Some Ojos Azules are deaf, due to the connection between hearing and pigmentation in mammals. A deaf cat may have either one or both ears tipped, or bobbed.

The carefully refined, more extreme-featured, modern-style Siamese has blue almond-shaped eyes; a triangular head shape; large ears; an elongated, slender, and muscular body; and point coloration. The short coat comes in a variety of colors and its pointed pattern, which is a result of the cat’s temperature-sensitive fur gene that alters hair shaft pigmentation in the cooler parts of the body, leads to color points. They are vocal cats.

Siamese cats have a distinctive appearance. They have large ears, an elongated, slender, and muscular body, and almond-shaped blue eyes. They also have point coloration, with darker extremities. These features are a result of the selective breeding carried out by breeders in Thailand (formerly known as Siam), from which the breed originates.

The snowshoe cat breed is one such breed with blue eyes. Most people consider it part Siamese and part American shorthair. Snowshoes have a snowy white coat with darker colored markings, much like a snowshoe hare. They also have distinctive pointed ears and may have either blue or odd-colored green eyes.

The Javanese is a breed of domestic cat with Siamese-style point coloration and sapphire-blue eyes. The Javanese cat is a breed of cat that has a long and elegant body. Its head is triangular-shaped with pointed ears. The breed comes in two coat variations – long haired and short haired. For the longhaired variety, the fur is thick and soft. The shorthaired variety is also fine and silky, but shorter than the longhair’s coat.

In general appearance, the Tonkinese resembles both its parent breeds: it is a medium-sized, muscular cat with a short haired blue coat and almond-shaped eyes that are amber to green in color.

A Tonkinese is a domestic cat breed produced by crossbreeding between the Siamese and Burmese. It inherited its pointed coat pattern and vivid blue eyes from the Siamese, as well as a distinctive coat color from the Burmese.

Black Ragdoll cats with blue eyes are among the most sought-after color and eye combinations in the breed. These cats can be a deep, warm black or even a smokey gray, but they must have blue eyes. The breed standard for Ragdolls calls for three colors: seal, blue and chocolate point; and three patterns: color point, mitted and bicolor.

” What’s So Special About a Blue-Eyed Black Cat? “

For starters, all cats are special, but black cats, especially those with blue eyes, are unique. Black cats don’t stand out like their more colorful counterparts. This is especially true of those who have light colored eyes.

There are many reasons people love black cats. Some love their sleek fur, while others like their quiet demeanor or intelligence. Still others appreciate their mysterious nature and wish to enjoy their company.

But there are also those who prefer the opposite — a cat that stands out from the rest of its feline brethren — which makes having one or two blue-eyed beauties around even more appealing.

Black cats have gotten a bad rap from a lot of people. The superstition is that they’re unlucky. But this stigma has been increasing more and more amongst people, especially in the western regions. There’s nothing lucky or unlucky about the color of your cat, but it’s true that the history of black cats may have begun with the Romans.

Black cats with blue eyes are easy to fall in love with. They have a beautiful, almost witch-like look about them that makes the perfect companion for many people. However, they are difficult to come by, but you can begin your search today!

Do the Kitten’s Eyes Stay Blue as they grow?

Kittens are born with blue eyes but, as they grow and mature, these can change to a different color. Some cats will have eyes that remain blue throughout their lives and others may retain only a hint of blue in their eyes, while the rest of the eye is a different color.

What is the Coat Colour and Eye Color Relationship in Cats?

The relationship between a cat’s coat colour and eye colour is not as clear cut as you might think. A black cat with blue eyes could well be “purebred” (a pure breed is one which came from other cats of the same breed). If you know the cat’s lineage (if it was obtained from a breeder or if you know its parents) then you can find out what breed it is.

Some More Facts About Cats