Trending Now
Peacock Lifespan: How Long Do They Live? Amazing...
What Are The Signs That Your Turtle Is...
Cashmere Lop Rabbit Amazing Info!
Turquoise Green Cheek Conure You Need Know!
How to Keep Your Dog’s Ears Clear of...
What You Should Know About Hermit Crabs Out...
700+ Famous Duck Names – Male and Female...
Does Autism Affect Cats? What You Should Know!
Cane Corso Amazing Dog Breed Info You Need...
Rex Guinea Pig Amazing Info You Need To...
AnimalFerretsInformation 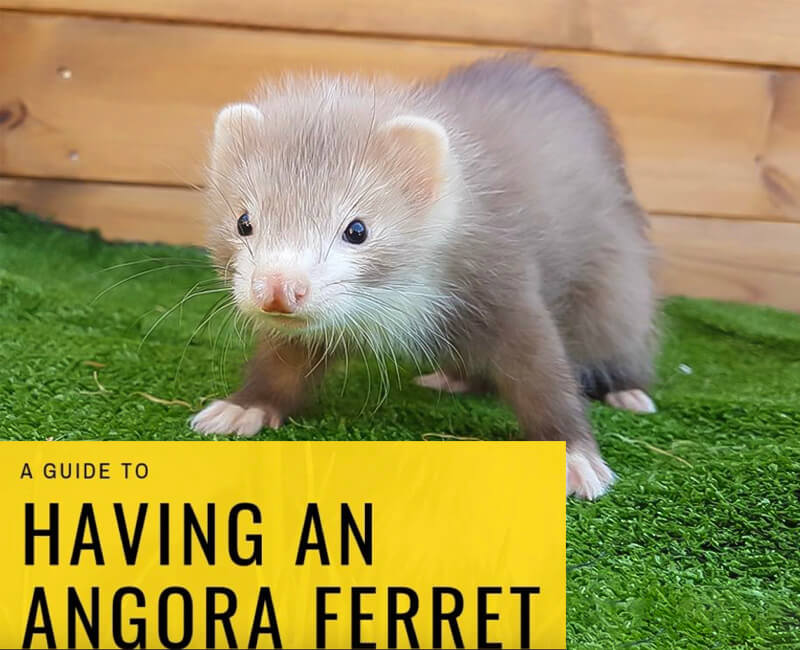 When a Swedish breeder realized that several of their ferrets had extra hair on their rear legs, they produced the Angora ferret almost by accident. He sold his pack of fuzzy ferrets to a fur farm, which transformed them into today’s Angora ferrets.

In the winter, they have more hair than in the summer, but their coat is always substantially longer than a regular ferret’s. Apart from the coat, these ferrets are just like any other.

How much do Angora Ferrets cost?

The cost of an Angora ferret is usually between $65 and $250. The color you select can have a big impact on the price, and more experienced and reputable breeders will charge more than less experienced breeders. Because Angora ferrets are uncommon, locating one in your area may be challenging, and travel fees may be a barrier.

They are bred for their fur.

Ferrets were initially raised for their fur, and it wasn’t until much later that they became pets.

Angora Ferret was a miscalculation.

The Angora Ferret is primarily a fur farm product.

Make sure you don’t spay or neuter your pet too soon.

Because their hormones take a year to develop, spaying or neutering a ferret too soon will limit their lifespan.

The Angora Ferret’s Temperament and Intelligence

Ferrets, like cats and dogs, have distinct personalities and are extremely lively with seemingly limitless energy. They are curious and enjoy exploring your home for hiding places and toys. You’ll need to keep a close check on them because they can disappear for several hours before reappearing in search of food.

Angora ferrets are highly intelligent and possess excellent memory. They build close ties with their owners and any other members of their family, and they like snuggling and being carried. They are quite agile and excellent climbers.

Is it Safe to Keep These Ferrets in the House?

Ferrets with an angora coat make excellent family pets. They are gregarious and enjoy being the center of attention. It enjoys playing games and will devise strategies to attract your attention if it believes you are neglecting it. Children will like carrying it around, and they will not bite unless you startle them or tug their hair.

Your Angora ferret should get along OK with other ferrets, but dogs, cats, and rodents are not recommended. Some dog breeds will ignore the ferret and get along OK, however others have a strong hunting instinct that can rapidly turn hazardous. Cats will almost probably go to considerable lengths to stalk and pounce on them. Ferrets, like cats, are carnivores who will hunt and kill any rodents they come across.

What to Know Before Getting an Angora Ferret:

Before buying an Angora ferret, there are a few things to think about.

Requirements for Food and Diet

Because ferrets are carnivores, they require a diet rich in animal proteins and low in carbs. High-quality dry cat food with plenty of protein is the most preferred way to feed an Angora ferret. Chicken and turkey breasts are a fantastic way to break up a dry kibble diet. You can also offer them some cat snacks in modest amounts.

A ferret does not require daily walks like a dog, but they do require at least two hours of fun per day. Allowing kids free reign of the house to explore and enjoy themselves is the greatest method to provide this activity. You may also throw balls and play with cat toys with them. You’ll need to keep an eye on them because their play can get rather aggressive, and they can quickly tear up most toys in a single session, swallowing sections of them.

Ferrets, like cats, are intelligent and easy to train to use a litter box. They’ll rapidly learn their way around your house and identify your voice, as well as understand what various tones in your voice signify, such as when it’s time to play and when it’s time to stop. With patience and perseverance, you may also train them to get accustomed to certain things, such as hair brushing and nail clipping.

A modest amount of maintenance is required for your Angora ferret, which is significantly more than a regular ferret.

Ferrets do not shed, but you should brush them with a soft-bristled comb or brush on a regular basis to help disperse their natural oils and remove any tangles or knots. Unless you sense a tangle building, once a week or so should suffice.

Angora’s ears have several nooks and holes where dirt and parasites can be hidden. Fleas like to hide here, which can irritate the ears. Cleaning the ears with a cotton swab at least once a month is essential. Brown wax is healthy, while dark black wax indicates the presence of a parasite.

The nails of an angora rabbit are extremely long and sharp. You should probably cut them back because they can harm your skin and your furniture. You’ll cut your pet’s nails like a cat, but it’ll take some time to get them used to it because they don’t like having their feet held. To get them acquainted to the practice, start by caressing them while holding one of their paws.

Ferrets have a particular odor that will worsen if they are not bathed on a regular basis. They are clean creatures who will do the most of the job for you, but you will need to bathe them once a month to keep the stench at away.

Angora ferrets are wonderful companions and pets. They’re entertaining to watch and play with, and they’re similar to cats in many respects. Their nails may rip up your furniture and leave you with a scratch or two, but with a little care and upkeep, they will bring you years of pleasure.We hope you’ve enjoyed learning about these fascinating pets and that you’ve found answers to any questions you may have had. If we’ve persuaded you to give one a shot at home, please share this Angora ferret tutorial on Facebook and Twitter.

You may also be interested in: 9 Things to Consider Before Getting a Hamster as a Pet

Do Cats Remember Their Mothers? Amazing Info You Need To Know